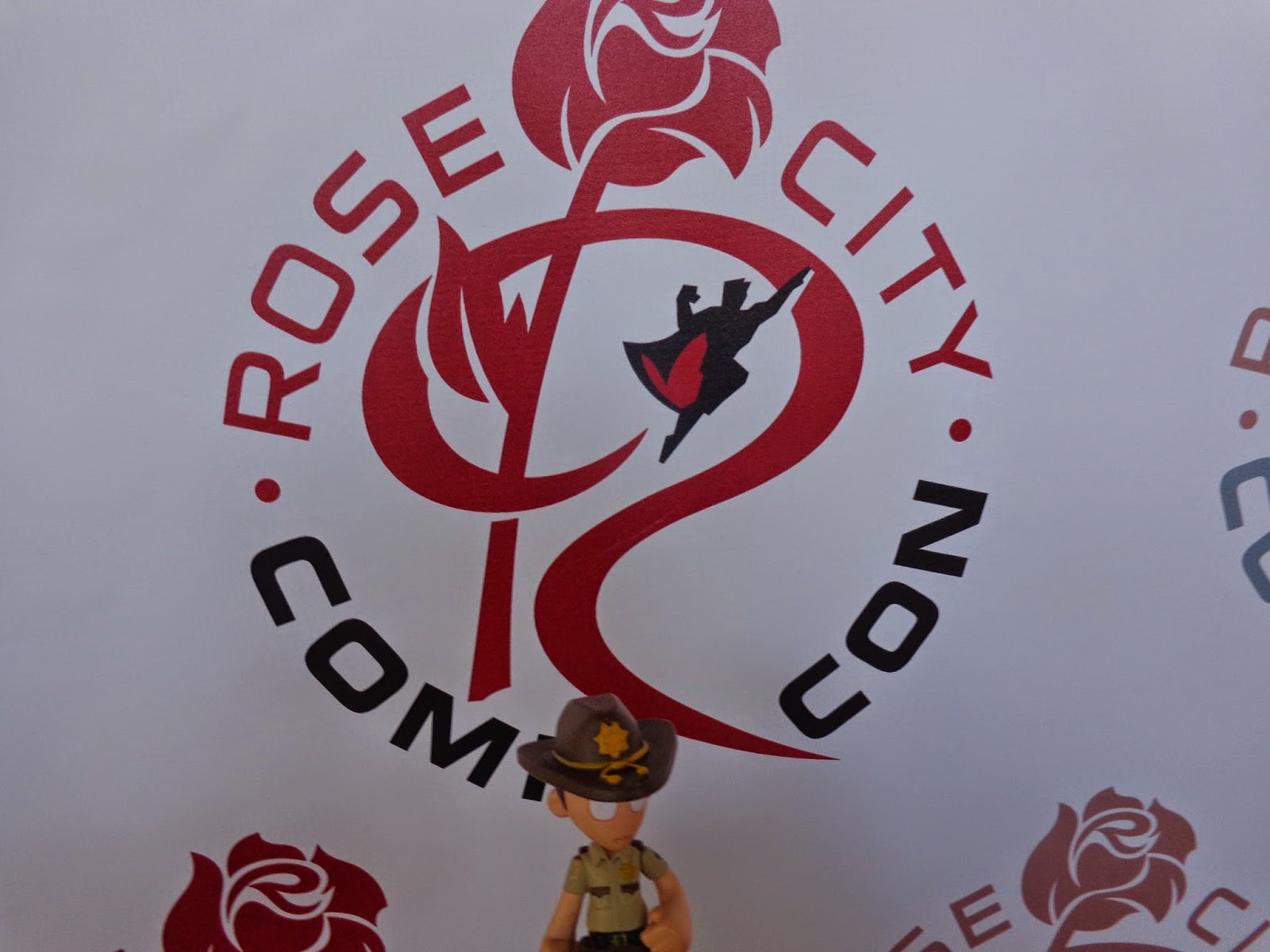 The bad news: I might be Comic-Conned out for a while.
The good news: I've really enjoyed all of the events I've gone to this summer.

It began Memorial Day Weekend in Houston with Comicpalooza, a four day extravaganza held at the George R Brown Convention Center. It was Geek Girl Soup's third year attending & the convention has grown each year. In August I went to a smaller event: the three day Houston Con held at a north Houston hotel. A week earlier, Will (a friend visiting from Portland, OR) was attending a friend's wedding at the same hotel. We met for coffee the next day & he told me about the Rose City Comic Con (RCCC) coming up in Portland in September. He was unable to go this year because he would be celebrating the 10th anniversary of LOST in Hawaii. However, I knew I’d be visiting a cousin in Portland, so I scheduled that trip to coincide with the RCCC.

I sent in an application for a media pass. Not being a local, I wasn't sure if they would grant my request. Much to my surprise, they approved it. Now because I was in Portland primarily to visit family, Mom was with me. That can only mean one thing: rental car adventures! Friday morning we headed back to the airport (around the same time that Will was en route to Honolulu) to exchange our second (the first never made it off the lot Thursday) rental for one with GPS. Because I was going to RCCC Saturday, Mom wouldn't have the Google Maps app on my phone to talk her through the unfamiliar streets. Once we had the right car, we zipped over to the Oregon Convention Center so I could pick up my badge & program guide for the weekend. Inside, people were already setting up the floor area for exhibitors, artists, & celebrity guests. I left filled with pre-con excitement & ready to plan my day at RCCC. 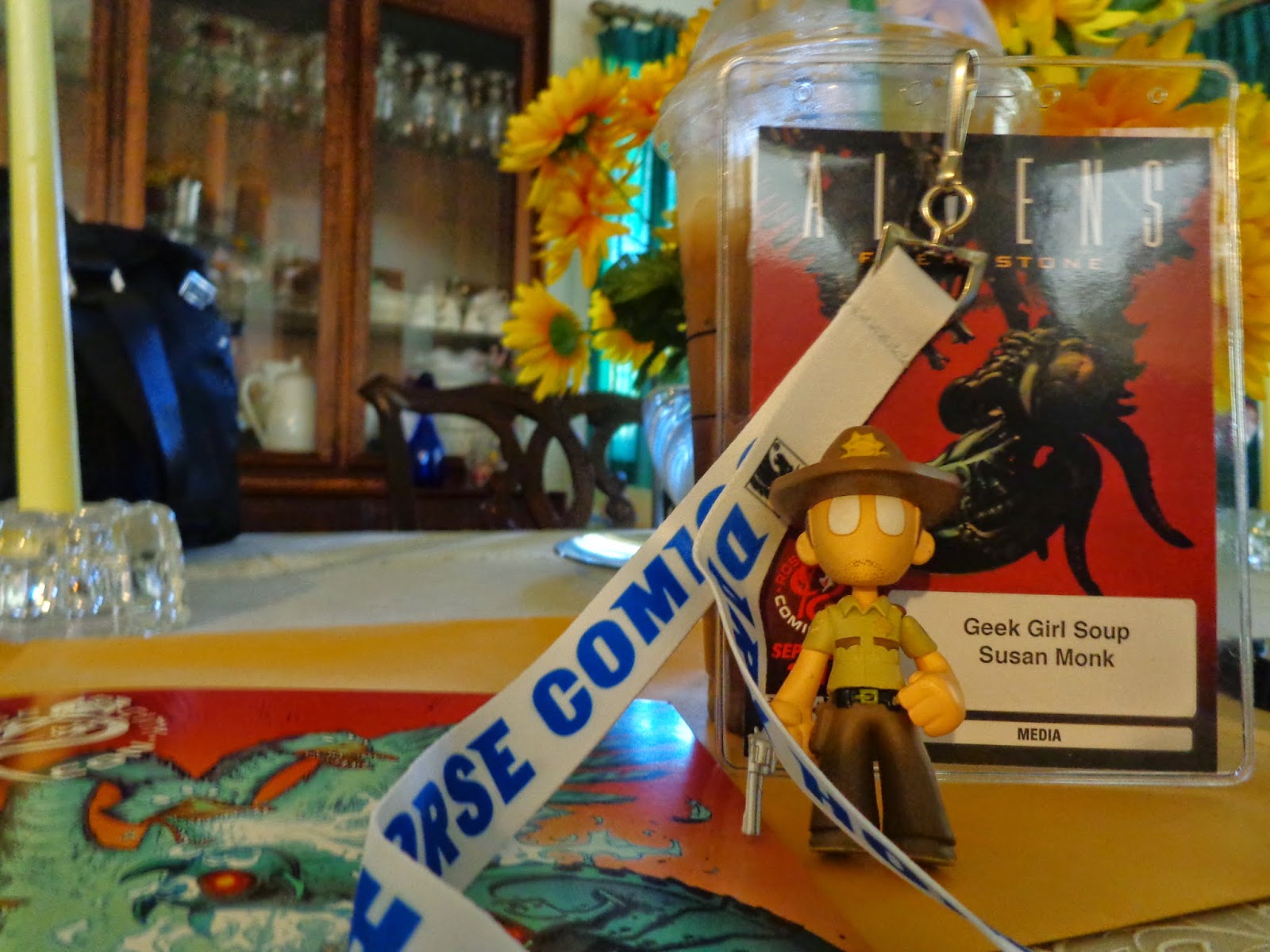 TANGENT: That afternoon Mom & I took our 95-year old cousin out to lunch at The Observatory  I loved it. Although it wasn't what the senior ladies usually ate, they found things to try on the menu & we all left happy. 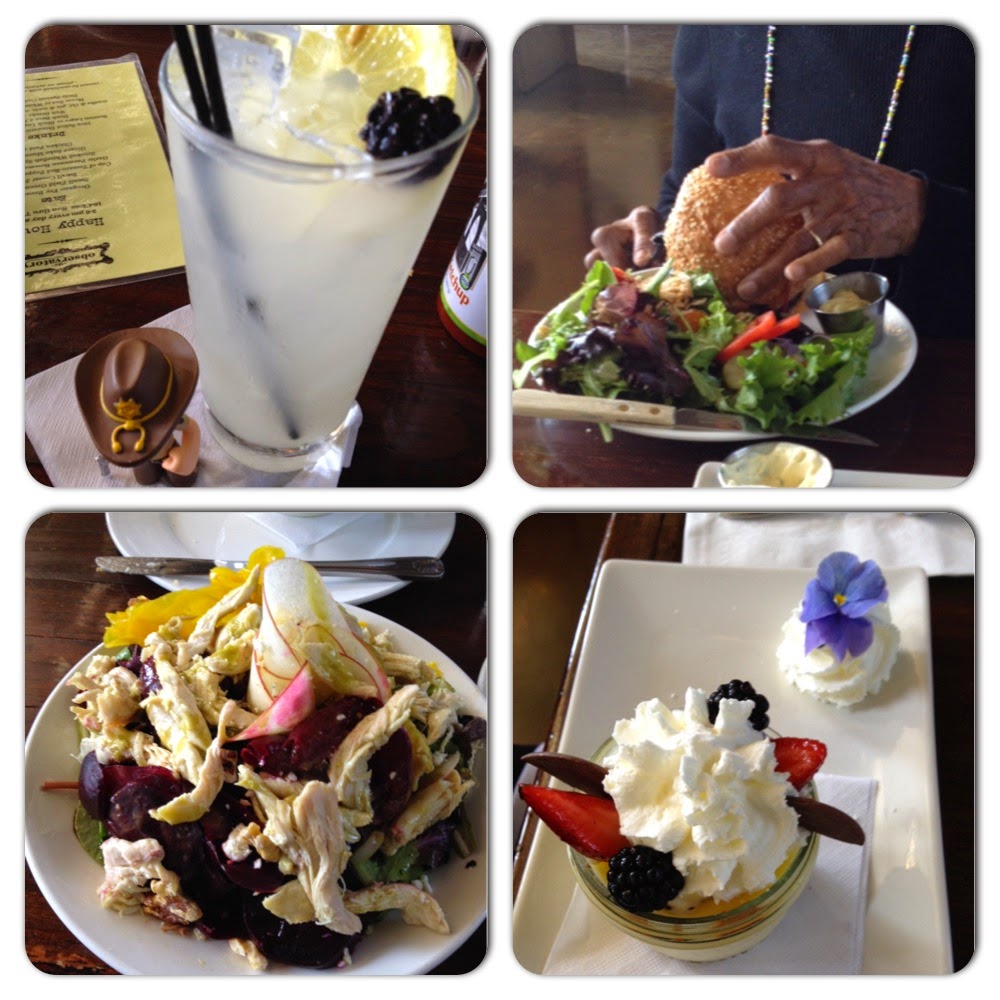 If you visit Portland, you must eat a meal here. You must also visit Blue Star Donuts for dessert. 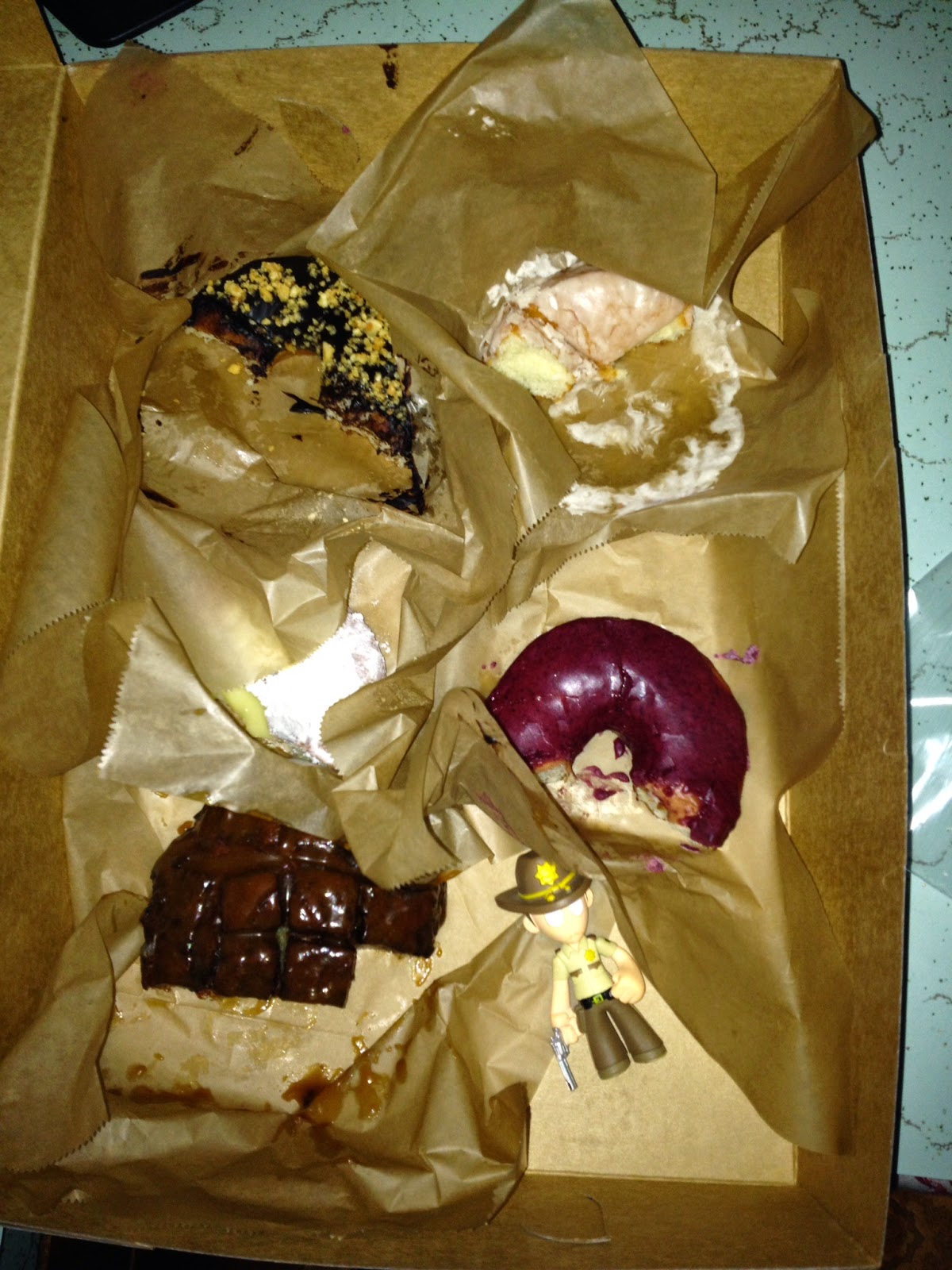 Despite not sleeping well, I woke up early on Saturday with a plan to visit various exhibitors and panels throughout the day. I was able to get onto the floor early & snapped a few photos of the Batmobile, Back to the Future Delorean, & a few of the R2 units built by the R2-D2 Builders Club. 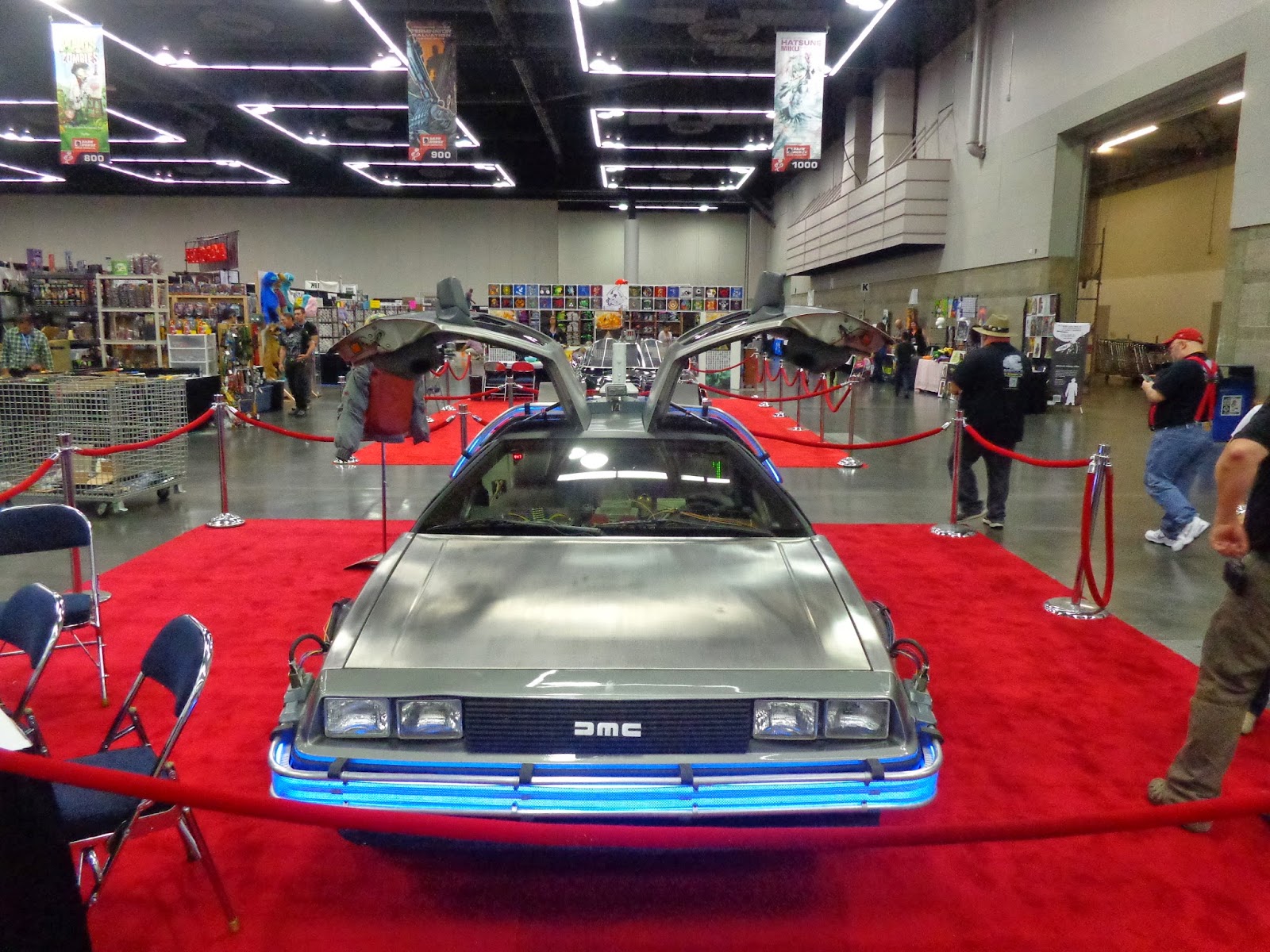 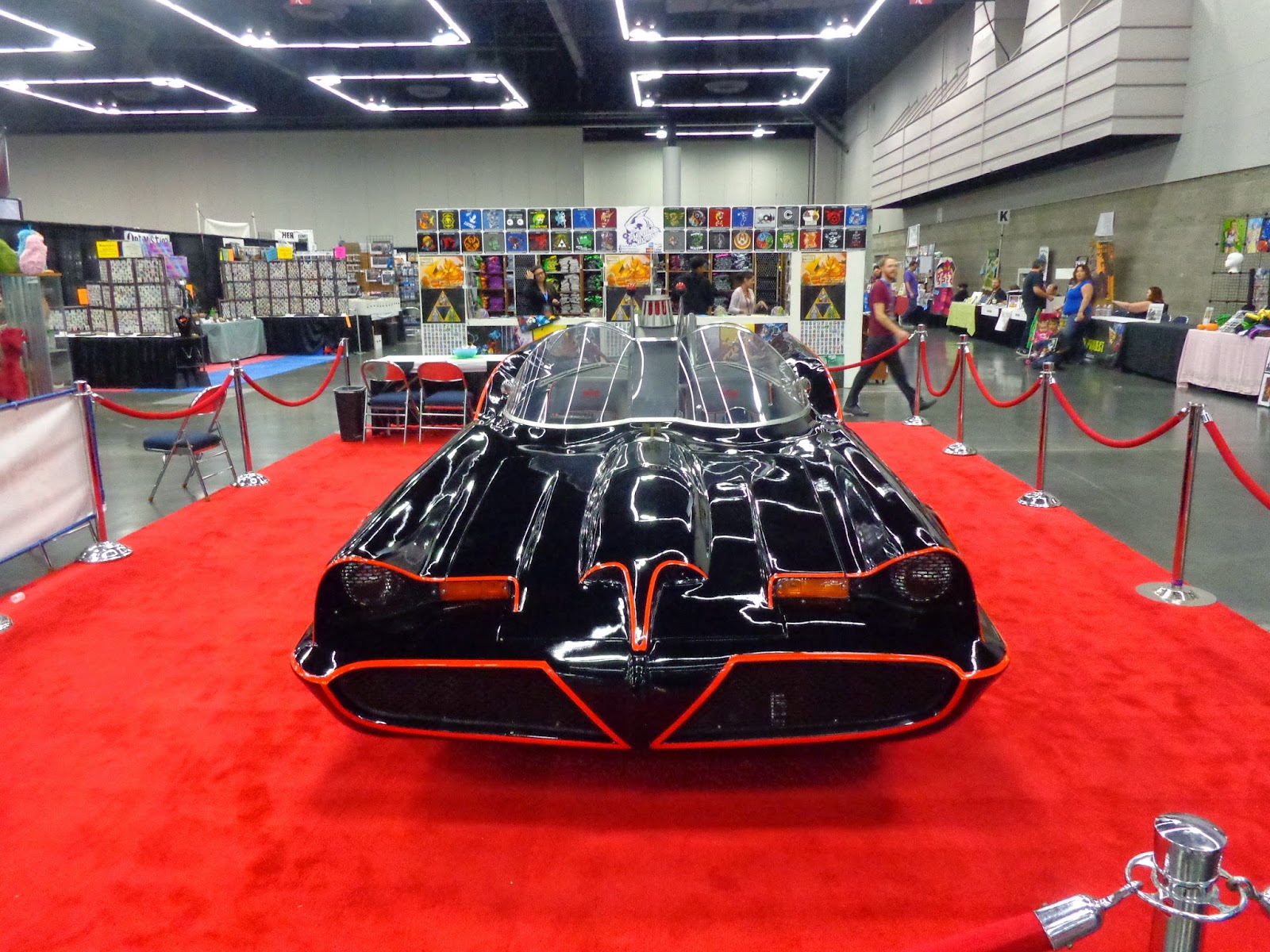 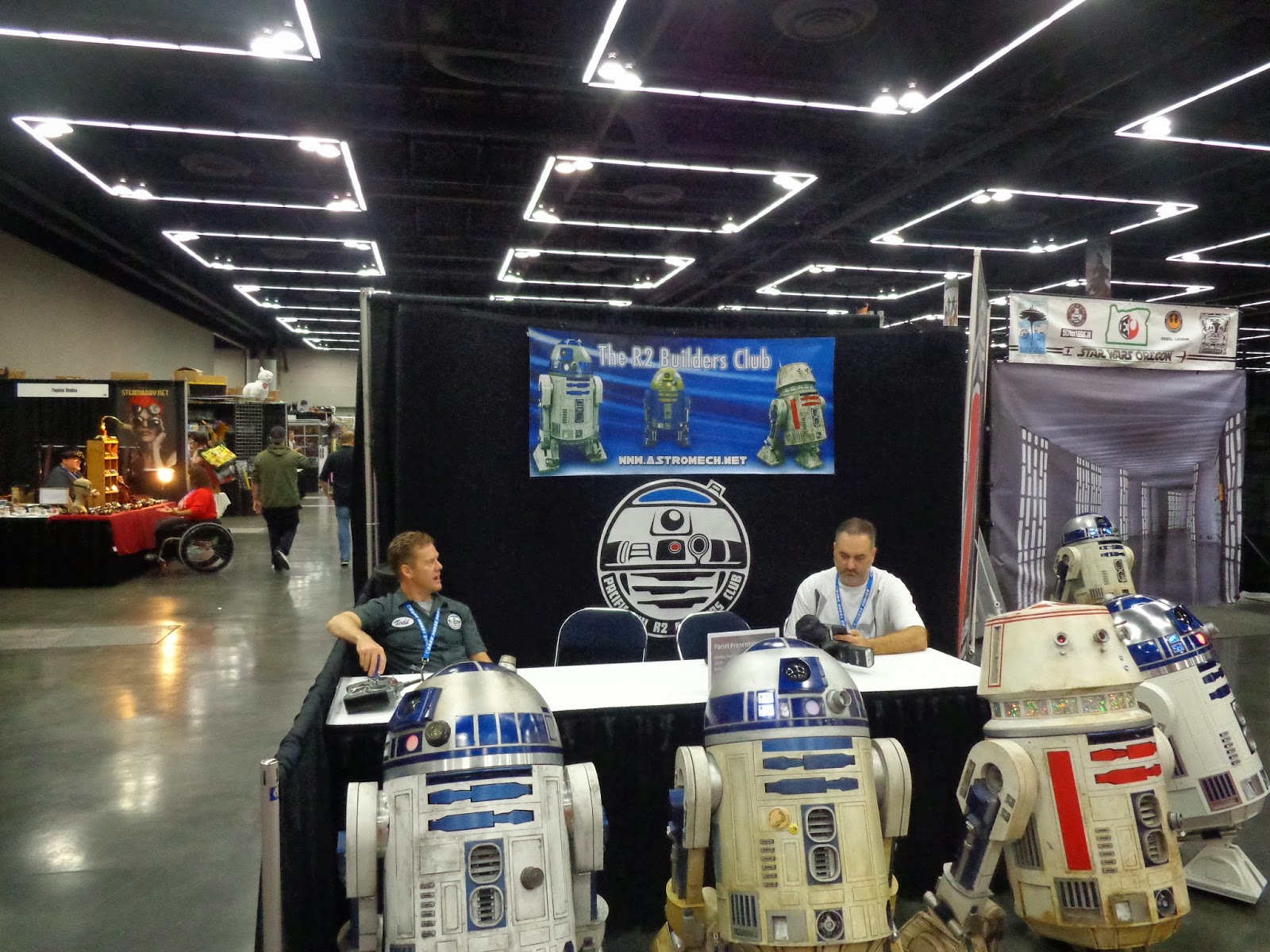 When the floor opened, it was crowded, but not overly so. I wandered around & saw some great stuff. But I kept my wallet in my bag, because when I fly back from a Con, I can't buy too many hard-to-pack items.

The first panel I attended wasn't one that I had planned, and I find that those are sometimes the best ones. It was titled "From Script to Panel" with comic writers Chris Roberson, Willow Wilson, Joshua Fialkov, Jen Van Meter, & Dennis Hopeless. 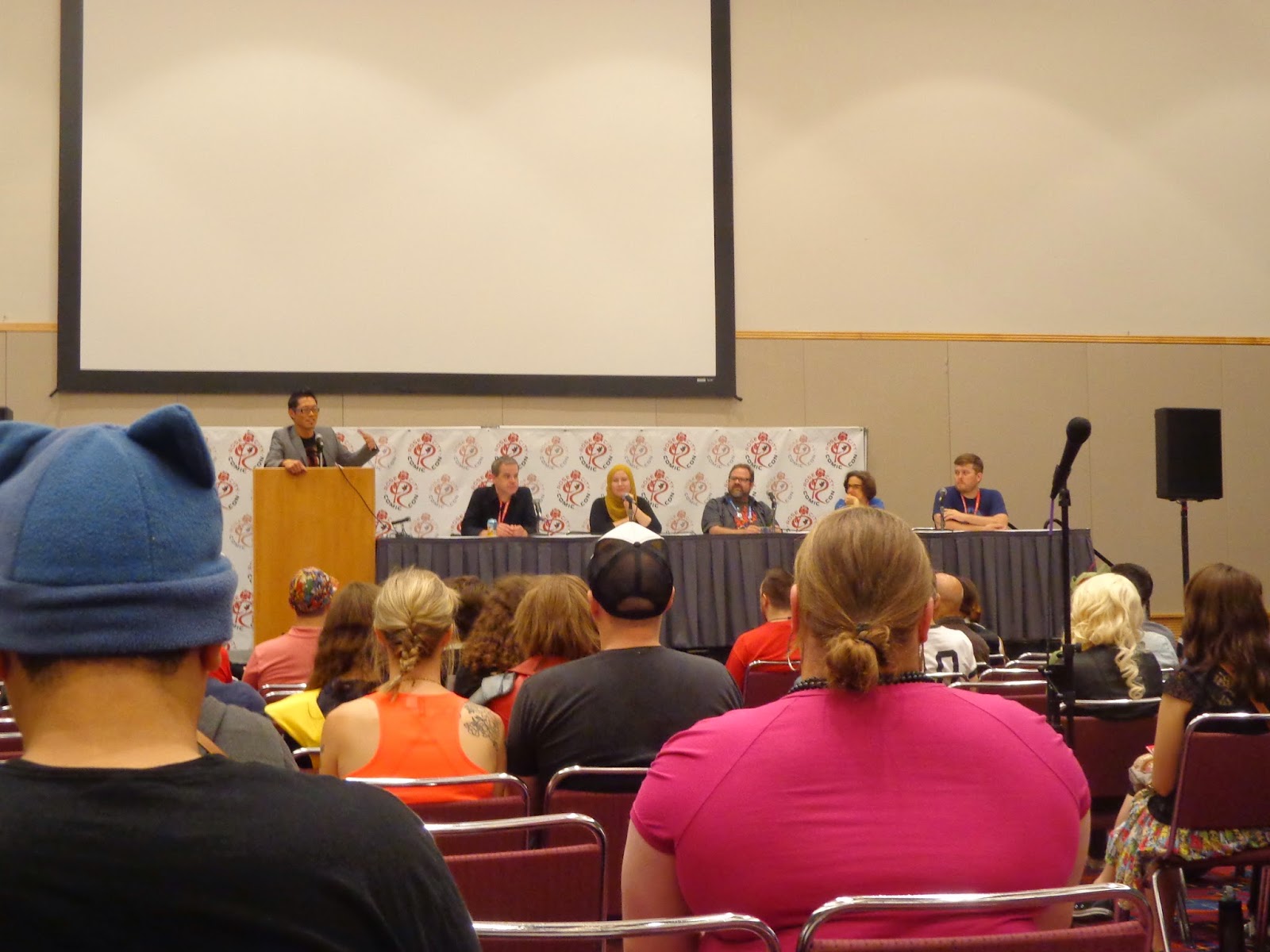 They all agreed that, in their experience, writing for comics was the toughest writing job to get and that each type of writing stressed different storytelling skills. For example, in comics there is a limited page count and it's easier to cross genres than in other types of writing (novels). Their best advice was write if and only if you have the sickness. Use writing to explore questions about the world. Also, aspiring comic writers should use the internet to self-publish so people can see that you can do the work. That can lead to possibly getting hired elsewhere writing comics. 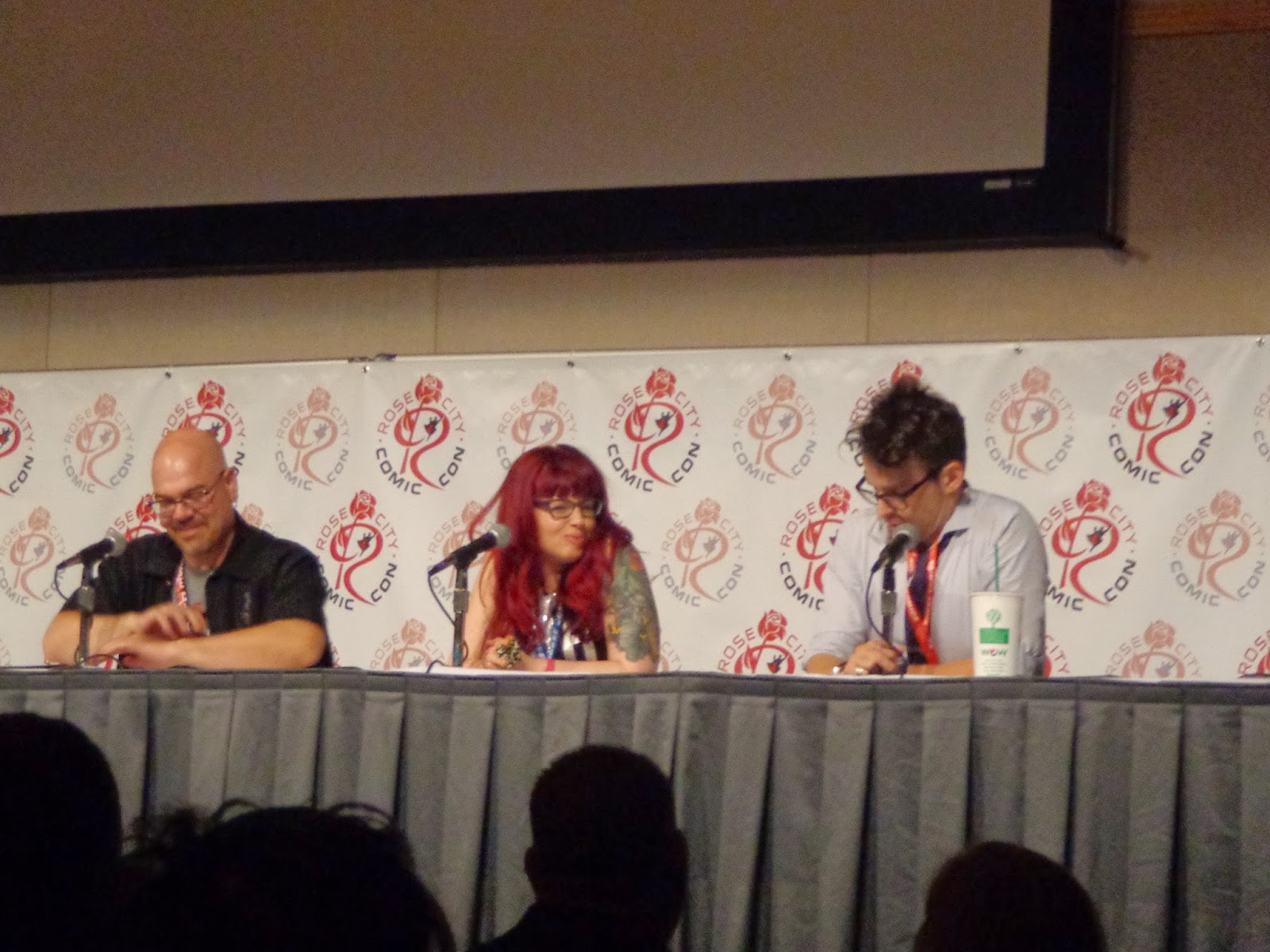 From the Under the Comic Covers podcast, I had heard about all of their work. Before the con I started reading Sex Criminals, but now I plan to check out the rest. These writers echoed the earlier panel in saying that writing is a sickness and added that most writers are depressed, cranky, and miserable. Except when they sell their work. Then they're just depressed and cranky.

After that panel I took a lunch break. Being away from home, I didn't bring my usual rolling case with recording equipment, snacks, and lunch. There were lots of fried foods available at "con prices." I ended up with a beef & veggie stir fry (because they were out of chicken) over noodles. It did the job and I got back to exploring RCCC. 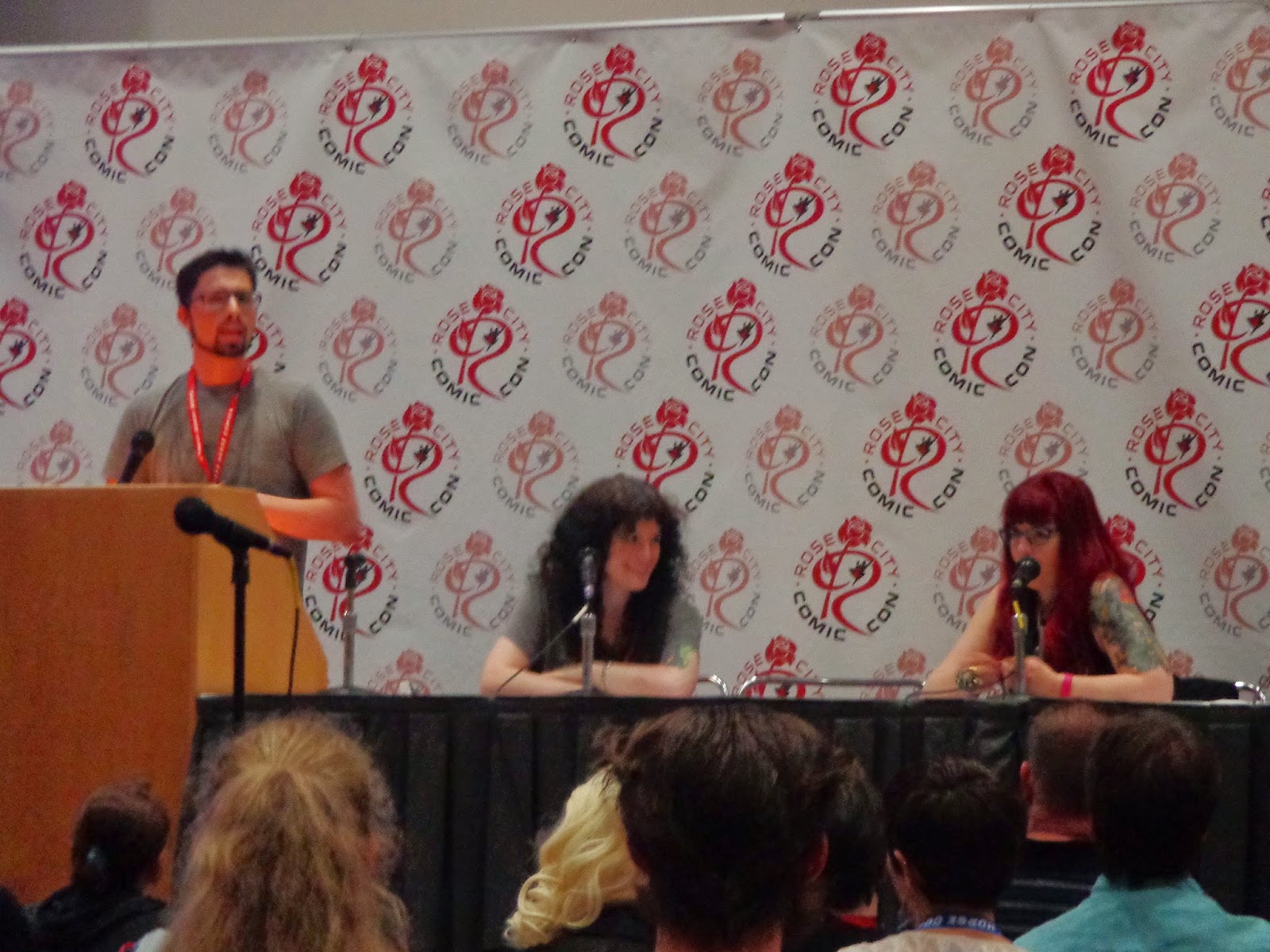 I was distracted for the first few minutes of the panel by a couple who were in Saga cosplay as the two main characters Alana and Marko. I regret that I didn't snap a photo of them after the panel because I rushed out to yet another one. After attending several comic writers' panels, I now know that Marvel style writing is when the writer gives the artist a synopsis of the plot rather than a longer, more descriptive style of mapping out the comic panel by panel. Having never read Pretty Deadly, I did hear some spoilers, but I'm sure I will have forgotten them by the time I read the comic.

Next was the Tony Moore Q&A. 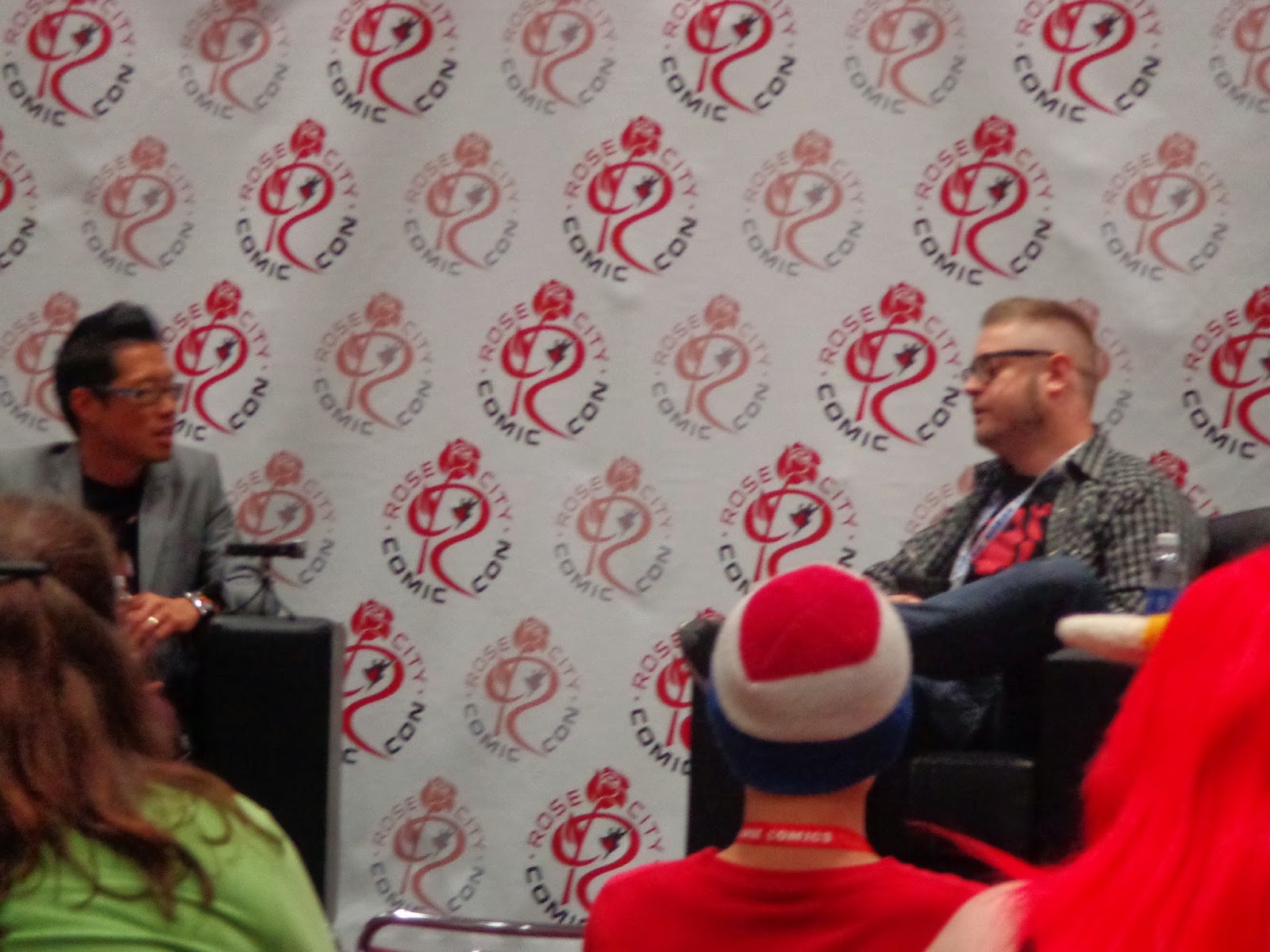 He's an artist and one of the creators of The Walking Dead. Moore grew up in Kentucky where he met Robert Kirkman in history class when they were 12 years old. Moore is yet another person in the comics industry advising against a career in comics...again, it's a sickness.

After that Q&A I had a break to walk around the floor again. I had my eyes on some artwork at the mercenaryartstudio.com booth and I was lucky enough to get one of the last Sons of Anarchy prints they had for sale. I also nabbed a couple of other things that I still need to figure out how to get home without ruining.

Next I got some coffee and headed back to the panel rooms. There was already a line for the Matt Fraction Q&A. The people in front of me were from a Portland comic podcast that I think was called the Comic Book City Podcast (I'm sorry I didn't write down the name, Bad Susan, but this one seemed to fit what I learned in our short conversation). This was the first con they've covered as podcasters and I’m looking forward to hearing about their weekend at RCCC.

Matt Fraction's Q&A with Ben Saunders was my last panel of the day, and it was also the most fun. 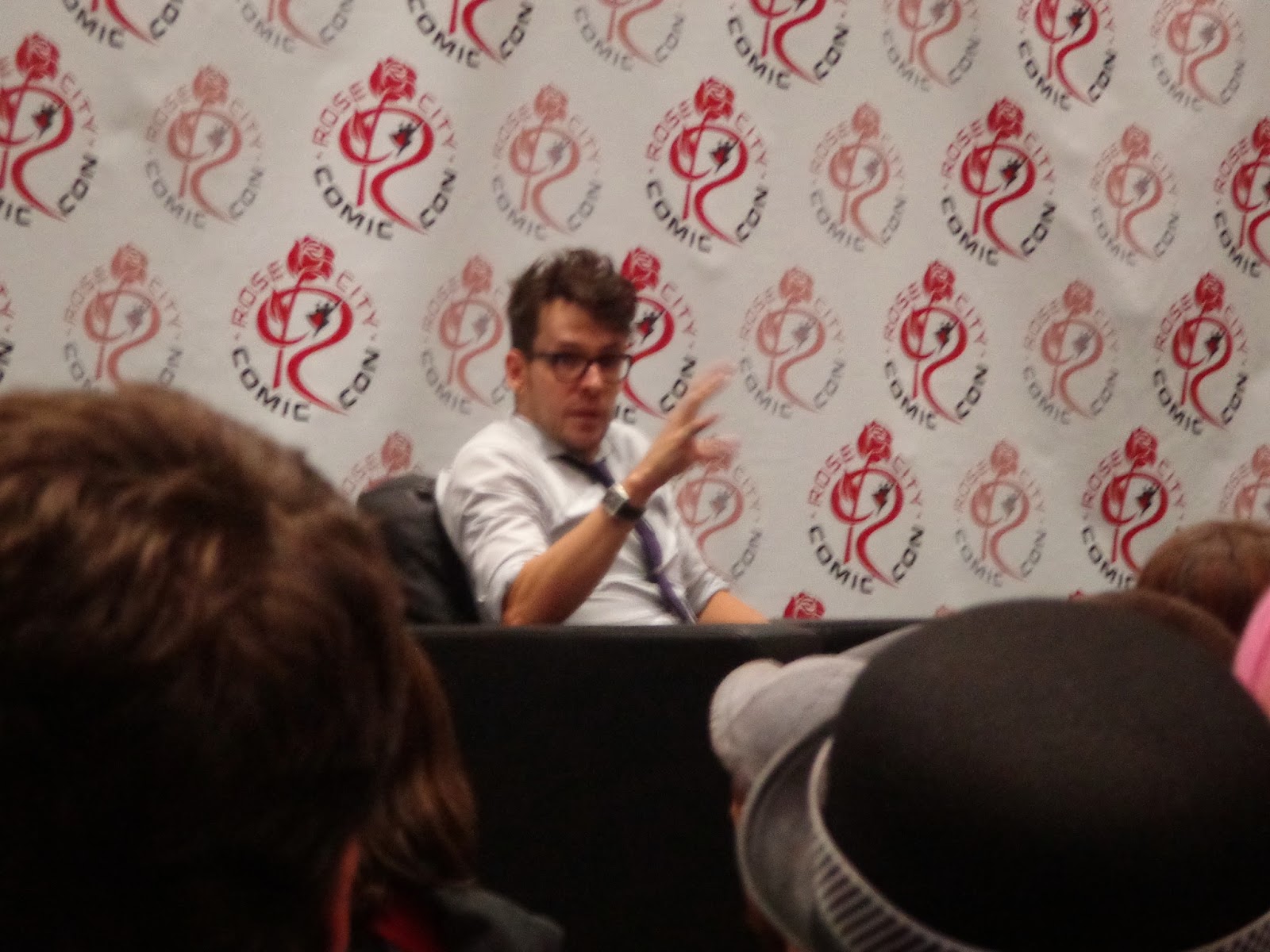 There was an imagined slide show, because there was no A/V in the room and a secret word that started the wave in the audience. Fraction talked about his work on Casanova, Hawkeye, Fear Itself, & Sex Criminals. He's also currently working on a retelling of Homer's Odyssey complete with dactylic hexameter. Like the other comic writers, he wants to go back and rewrite everything he's ever written and he hates Wednesdays because that's the day in comics when all "mistakes" become permanent.


Even if it was just for one day, I'm glad I was able to attend the Rose City Comic Con. It was nice to go more for the comics this time than for the celebrity panels and interviews — not that I don't also enjoy those, but comics are what started all of these conventions! I only wish I had time to taken more photos of some truly amazing cosplay, as I saw some marvelous costumes (Groot, Pokemon, Frozen Princess Elsa).

So a big thanks to the RCCC, for letting me experience a West Coast Con. 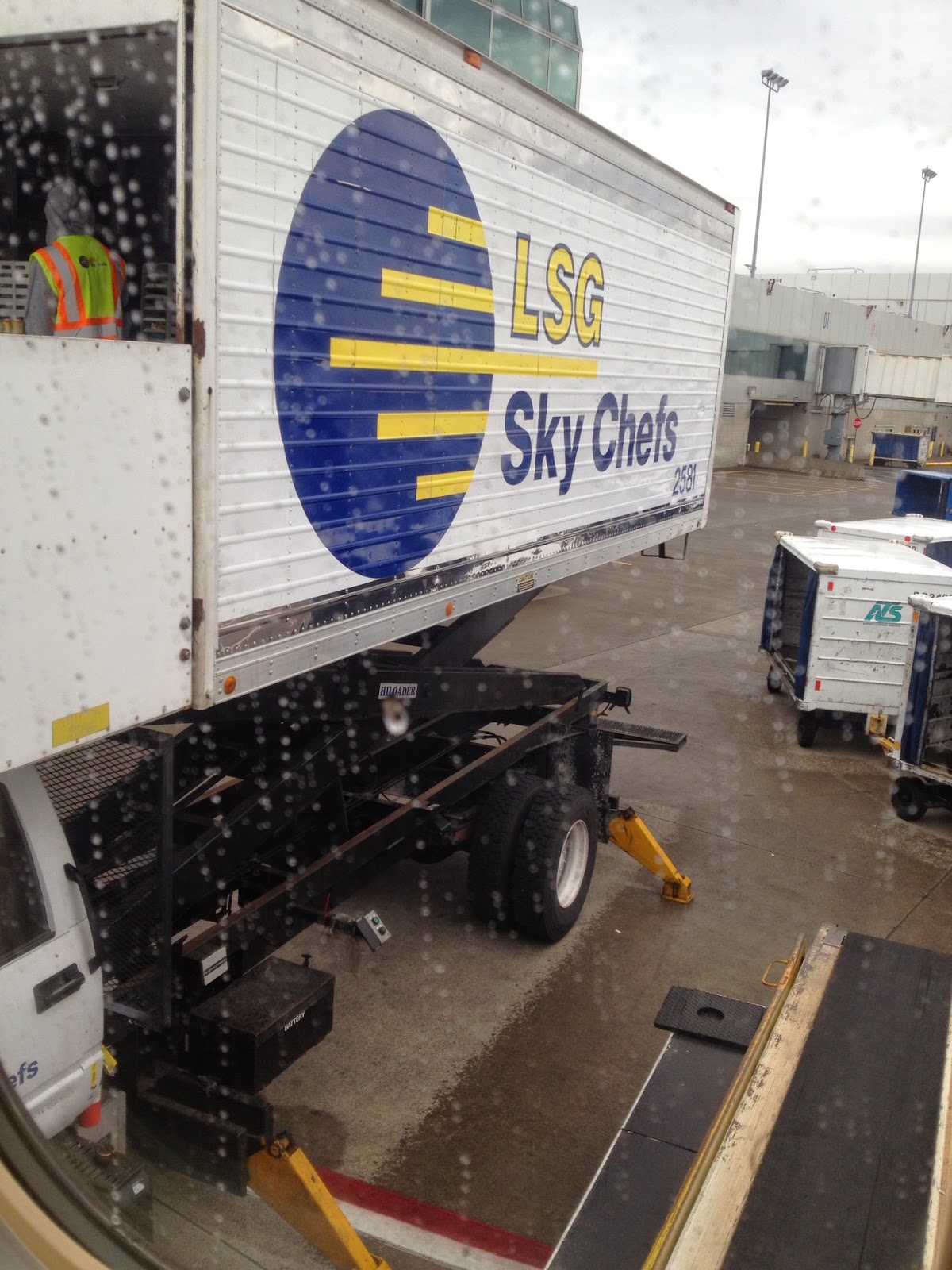