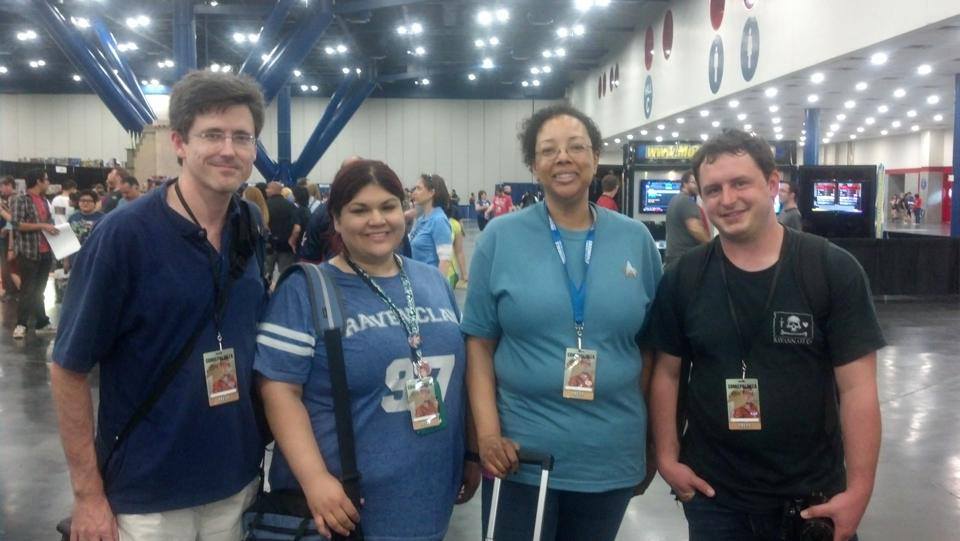 
Comicpalooza and Galacticon III just ended. It was another great Memorial Day weekend of events for Geek Girl Soup. Amelia and I attended with help from photographer/reporter Will (here are some of the photos he took) and photographer Chris. Kelly was also planning to be with us for her first Comicpalooza, but she was ill and unable to make the trip to Houston. I was lucky enough to be able to attend all three days of the Texas International Comic Con starting Friday morning. I started by picking up my badge and checking to see if any of the panels or Q&A sessions I had planned to see had been changed. Preparations had been happening for weeks by the Comicpalooza organizers, guests, dealers, and attendees like us. I had a rolling bag with recording equipment, my ipad, chargers, food, water, and a jacket. Last year, my shoulder felt like it was going to fall off by the end of the weekend when I carried all of this in a bag.

I checked out the first floor of the convention which held the dealer tables, guest signing areas, artist tables, and fan groups. Amelia and I met up a short time later and coordinated our schedules. She planned on going to several writing panels over the weekend while I was interested in the entertainment related panels and events. The panels were on the third floor this year in rooms with walls and doors. Last year, the “rooms” were separated by curtains. Real rooms with solid walls and doors were much better! People weren’t yelling over quidditch, wrestling, or roller derby going on ten feet away.

My first panel was Gary Russell talking about writing Doctor Who. He talked about the process of working on The Doctor Who Encyclopedia and working as a story editor on the television show. Next Amelia and I walked around the first floor before our interview with Vlad Yudin, creator of the new graphic novel Head Smash. It comes out in July and is already being adapted for film. I have a preview copy of the comic, which you can also read here. Can’t wait for the full graphic novel!

One of the best performances last year was belly dance, and the Sparkling Shadows Belly Dance group was back again this year for another great show. They held a workshop Sunday afternoon, which I unfortunately missed. My next panel was Women in Leadership Roles in the Video Game and Anime Industries.  Samantha Innoue-Harte, Valerie Head, and Lyndsey Koehler held a very interesting discussion that could have gone on for another hour. Next I went to Stage Acting v Voice Acting with Claire Hamilton & Josh Grelle. They described their experiences with both and the transition from stage into voice acting. Amelia, Will, and I convinced Claire and Ric to join us in the board game room for a few hands of Cards Against Humanity. Claire has vowed to play again. I’m hoping we don’t have to wait a whole year for our next game.

Saturday there seemed to be three times as many people in the GRB than on Friday. For one thing, there was a graduation going on and many of the celebrity guests were arriving for Saturday only or Saturday/Sunday appearances. I started the day with three panels, but I couldn’t find two of the rooms, so I went back to the first one and it still hadn’t started. It took about twice as long as it should have to walk to the location because of the graduation going on in the middle of everything. Amelia and Will were learning to waltz when we got the call that Rene Auberjonois was available for an interview. We were taken to the area where the celebrity guests were relaxing and eating lunch. When we walked in, Avery Brooks saw my Star Trek uniform shirt, got up, and walked to another area of the room far far away from us. Michelle Rodriguez saw our Zoom recorder and asked if it was a Taser.

The next big event of the day was the Danny Trejo Q&A. The room was packed! He talked about a couple of movies coming out in September, Machete Kills and Bad Ass 2. He told stories about how he got started acting after getting out of prison and working with the Muppets more recently. He did say that when he got a part in Sons of Anarchy he was hoping to get to ride a motorcycle, but no. Michelle Rodriguez (also in Machete Kills) spoke next, but she started by jumping on the table to take a photo of the audience and post it on Twitter. She talked about coming back from the dead (Resident Evil & Fast and the Furious), being a strong role model for girls and women, and her plans to work on some of her own action projects.

Two Star Trek panels were next. Avery Brooks’ Q&A was more like the first day in his university seminar. He talked about acting, music, and inspired the audience to use what we’ve been given, exercise the wisdom of restraint, be still, and take joy in being alive. When asked about the lack of flying cars, Brooks responded, “WHAT?” as did most of the audience. Next, Sir Patrick Stewart’s Q&A was moved to an open area where all the people who wanted to attend could be accommodated. He talked about the Star Trek years, filming on X-Men: Days of Future Past movie, his roles on stage, and his work against domestic violence. His favorite episode of ST: TNG is Inner Light.

I took short dinner break and went to the Authors Behaving Badly panel which was a discussion of what happens when authors sabotage their careers by reacting badly to criticism or fan comments. The internet never forgets. I finished the evening with Diversity in Comics. I wish this had been held earlier in the day because I was so tired I could not really focus. I do know that I plan to attend more of these types of panels next year.

Sunday I just wanted to sleep, but it was the final day of the convention. I made it in fueled by caffeine and sheer determination. The day started with 2 Star Trek Q&A sessions. First, Rene Auberjonois talked about the times he has been in Houston before to perform and visit family, living in Los Angeles, and a few Star Trek stories from The Undiscovered Country and Deep Space Nine. Next Armin Shimmerman told his side of the stories that Rene told and some more DS9 stories. I learned that he is a writer and a Shakespeare scholar. I had planned to go to the belly dance workshop after this Q&A, but I was too tired. Last year, the workshop was a good break from sitting in panels. It was a good abdominal workout and I was a little sore the next day. Instead, I spoke to Marci (friend of GGS) about her experience at Comicpalooza.

After the break, I went to my final panel Comics: Digital vs Print. This was another interesting panel. In the Diversity in Comics discussion the night before, they had talked about accessibility in comics, so I was thinking going to comic shops vs purchasing a digital copy. As artists, they also discussed it from the creators point of view. There are also some hybrid experiences – motion comics and people filming the pages and uploading a video to the internet.

Before I left, i sat down with Will and we recorded our thoughts and highlights of the weekend. You can listen to that here. It was a great weekend and I wish I could have cloned myself and gone to more of Comicpalooza.