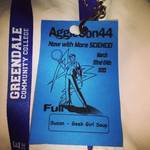 AggieCon was last weekend and it was awesome (this coming from someone who really only attended half of what was offered). The panel I was looking forward to the most was the Saturday interview of author George R.R. Martin by author Ernest Cline. Martin’s A Song of Ice and Fire series is the original story on which HBO’s Game of Thrones is based. Ernest Cline wrote the screenplay for Fanboy, a geeky roadtrip across the country to Skywalker Ranch and the 2011 novel Ready Player One (full of wonderful 80’s pop culture references). Honestly, I was a little bit nervous before this interview even though my only involvement was as a spectator. Cline posted a video of the interview and Q&A here.

Ernest Cline seemed to be geeking out as much as the audience was over George RR Martin. Martin was in College Station for the opening of the Deeper than Swords exhibit at Texas A&M’s Cushing Memorial Library. The exhibit features letters, manuscripts, and other objects from Martin’s career. One of the items in the exhibit is a letter he wrote to Stan Lee in November 1963. It was published in Fantastic Four #20. Martin’s descriptive writing style was present even then.

Cline and Martin discussed Martin's career as a novelist and screenwriter. Cline, and many other readers, believes that Martin improved upon fantasy writing by adding sex and religion to his work. He enjoys exploring the world of spirituality and infuses influences from different world religions into A Song of Ice and Fire. In the Q&A session, his advice for prospective writers was persistence. Keep writing, do the best work you can do, and don’t worry about how people are going to see it. A couple of people asked specific questions about Game of Thrones and Dance with Dragons. Basically he gets his inspiration from everywhere – Three Stooges, comic books he read growing up, history, friends, or other sources. One of the best moments was when both Martin and Cline got geeky about Star Wars. Yes, someone politely asked if he felt pressure to finish the books. He said he is more of a perfectionist now with his writing and is being more selective about what projects he says “yes” to doing. He did answer a question about a more “sensitive” subject – the sex scenes in his books. He says that the people who would like him to have more male-male encounters in his books are mostly women.

On Sunday, Martin read two chapters from The Winds of Winter which is due out, um, when he finishes it! I will not post the names of the characters and what they were doing, but if you really want to know, I can tell you more via email.

Cline, on the other hand, grew up wanting to be a filmmaker. In addition to playing video games, reading comic books and scifi, and going to the movies, he collected and studied screenplays. The first one he wrote was a sequel to Buckaroo Banzai in 1996. He gained notoriety when he posted it to the internet and many people believed it was leaked from whoever was making the film. Two years later he started writing Fanboys which was released in 2009. When I read Cline’s novel, Ready Player One, I got geeky and nostalgic for the 80’s. His DeLorean (ECTO-88) is the best business expense ever! Cline bought it when he knew he would be going on a book tour for Ready Player One. 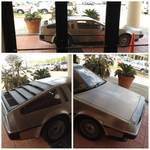 Another interesting panel I went to was on Special Effects Makeup. I learned a lot of cool new tips, so I should be ready for Splatterfest in a few months!
Posted by Geek Girl Soup at 7:15 PM