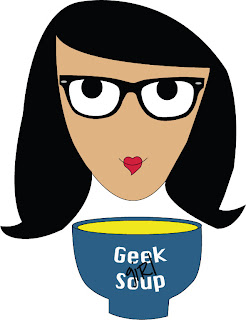 In this podcast, Susan and Amelia listen to their guests Chris and Kelly discuss Skyrim, Final Fantasy, and Mass Effect games.

We recommend these videos to enhance your enjoyment of these games and this podcast:

Posted by Geek Girl Soup at 1:23 PM No comments: 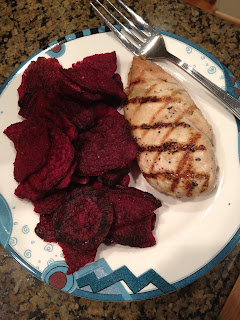 In this podcast, Susan and Amelia discuss nutrition with our guest geek Gigi. She gives us some tips on what we can do to make our diets more healthy.

Posted by Geek Girl Soup at 1:01 PM No comments: 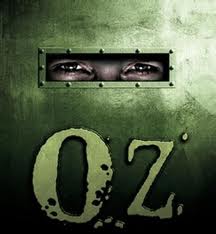 In this podcast, Susan, Amelia, and Chris finish the discussion of season 2 of OZ with episodes

Posted by Geek Girl Soup at 2:23 PM No comments: 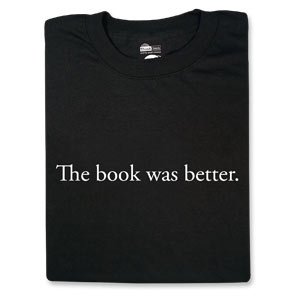 (susan)
They may have the same name, The Walking Dead, but they're nothing alike. Well maybe a little, but definitely not after that episode: Judge, Jury, Executioner. I was once told by Adam & Matty of Filmspotting never to compare the movie to the book because I would be left disappointed by the movie. There's no way filmmakers can squeeze everything from several hundred pages into a two hour film. Well, the same goes for tv shows based on comic books. The tv shows and movies are reinterpretations of the same stories, but they may contain different characters and plotlines.

When you read a book, you use the words on the page to create a look and sound in your mind. You also hear  the character's inner monologue. In comics, the look of the characters and their surroundings is provided, but it is still up to you to create the voices and environmental sounds for yourself.

In a film or tv show, the looks and sounds are all chosen for you by the people bringing the story to life. Often, because of time and/or budget constraints, certain parts of the story must be cut. The cuts they make may not be the same cuts you would make if you were in charge of adapting the screenplay.

Different people find different details important to the overall story. Sometimes characters are omitted from a film/show or multiple characters are combined into one for the screen. For example, the character of Tara in Charlaine Harris's Southern Vampire Series is White and owns a dress shop in a strip mall owned by Bill Compton. In HBO's True Blood series, Tara is Black, not a business owner, and the cousin of Lafayette, a character who was killed in Harris's first book. It is these changed storylines which anger and frustrate readers so much. They are used to the story they read and want to see the re-imagining of exactly that. In the case of Lafayette on True Blood, I believe keeping his character alive changes new characters and storylines for the better. A great deal of the appeal is the actor Nelsan Ellis, who plays Lafayette.

Another HBO series, Game of Thrones has been able to include many of the story arcs from George R. R. Martin's first book (and a little of the second) in the Song of Ice and Fire series in the first season of the show. The books contain detailed descriptions of the characters, lands, and the politics involved with ruling them. The show does an amazing job of showing us the complexity of the many stories and characters coexisting, not at all peacefully, in the world of Westeros.

Sometimes, it may be best to watch the movie or tv show first before reading the book it was based on. That way, you start with a smaller story which is expanded, and sometimes explained by the written material.  It's possible to also avoid the disappointment in the on screen version of the story as well.

I try as much as I can to keep the written and on screen stories separate. I know they might go in similar directions, but not always identically. When one doesn't go the way I am expecting, I have to tell myself it's not supposed to. This version is a different interpretation by a different person and that's why it is so different. Different doesn't mean worse. This new direction could be better.

In the transition of Robert Kirkman's The Walking Dead (TWD) from the comic book to the tv screen, there have been many changes even before the shocking death in Judge, Jury, Executioner. The group's visit to the Centers for Disease Control in Atlanta, The Dixon brothers, T-Dog, and Sophia's death were some of the additions to the show. Cut from the show were twins Billy and Ben, Shane's death in issue 6 (he was shot by Carl), and the relationship of Dale and Andrea.

This season, after each show airs, Chris Hardwick hosts Talking Dead. One week he had Robert Kirkman on the show and Kirkman said that it was interesting to see how TVShane's character had developed after the group left the original camp. He also said that maybe he shouldn't have killed him off so quickly in the comic. Even the writers see new possibilities in their stories.

One of the biggest surprises in the show was the unexpected death of TVDale in the show's most recent episode. He was one of my favorite characters in the comic, and I was sad when he died there, but it was much later in the story, after the group had left Hershel's farm. His death in the comic also had a profound effect on Andrea because they were in love. They were an unusual couple, but interesting and believable. I was hoping to see this in the show, but both characters seemed headed in different directions. TVAndrea was not as much aof a bad-ass as the ComicAndrea, and she was now being paired with TVShane. With TVDale's death, that relationship will never be. Who will be the new "voice of wisdom"? Herschel?

Some times a viewer will hear a rumor that an actor got a part on another show and know that the charater is doomed. There was another actor whose name had been mentioned, but not  Jeffrey DeMunn. looking back, it's not surprising that he was killed off so soon because when Frank Darabont left or was fired from the show, there was a rumor that a cast member who asked to leave the show as well. That person may have been DeMunn since he and Darabont have worked together since The Shawshank Redemption.

I figured TVDale was safe. As safe as one can be with zombies loose in the world. I was getting too complacent with the show since my main group was still mostly in tact. One of the main things that ComicRick tells the group a lot is to stay vigilant. The group is in a place right now that seems safe, but with walkers all around is it protected enough? The place the TV group is headed was one of the most brutal from the comic. I'm really looking forward to seeing how that is handled on screen and I'll try my best not to be too upset when it goes in a direction I would not have taken it.

In today’s podcast Susan, Amelia, and Chris discuss Ryan McGee's Feb 20, 2012 AVClub article, "Did The Sopranos do more harm than good?: HBO and the decline of the episode."