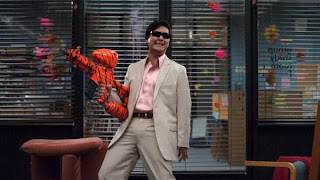 Since I miss Community, here's some information about one of my favorite characters on the show, Senor Ben Chang played by Ken Jeong. Our favorite study group met because of Senor Chang's Beginning Spanish class. Jeff wanted to meet Brita, so he told her about a fictional study group, to which she invited someone who invited someone else, and so on. Chang was also known as "El Tigre Chino" because his knowledge will bite your face off. Senor Chang's teaching style is sadistic towards his students, one reason being that he has a rocky marriage and an anger management problem.

His wife kicks him out during season 2 and he moves in with Jeff until Jeff can't stand living with him and kicks him out as well. . At the end of the first season, we learn that he has a fake degree, so he enrolls in classes with Jeff and his study group. After much campaigning, he is voted into the group over another student who makes homemade kettle corn. In the third season, Chang is living in Greendale's air ducts. When he is found out, the Dean offers him room and board in exchange for his working as a security guard.

In just a few more weeks, we'll find out what everyone did for the holidays and what they're studying this Spring. Community returns on March 15th!
Posted by Geek Girl Soup at 8:00 PM