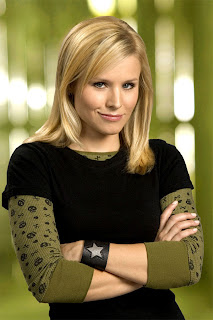 (Amelia)
Not since Magnum P.I. has a super sleuth been so appealing. In 2004 we were introduced to Veronica Mars, arguably the most underrated high school character ever seen in prime time television. She had the blonde cheerleader looks of a 90210er but enough wit and wisdom to go up against any Aaron Sorkin character.
As high school dramas go, Veronica was a bright spot in an otherwise superficial playing field. She said the things you wanted to say and did the things you wanted to do and managed to look like an actual high school student rather than a high priced call girl.
The 3 years of Veronica’s life we were given exposed us to the glamour and the seedy underbelly of fictional Neptune, California and left us thirsting for more. These were characters we could connect with and at the end of the day you’re still curious where Veronica and Logan ended up.
Posted by Geek Girl Soup at 11:00 PM