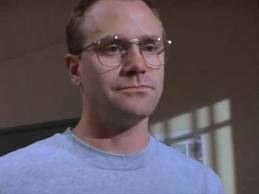 Tobias Beecher is prisoner number 97B412, Convicted July 5, 1997 of driving while intoxicated & vehicular manslaughter, sentenced to 15 years, up for parole in four. Episode 1 of OZ (The Routine) opens with Beecher coming to the Oswald State Correctional Facility after his conviction and former life as a corporate attorney, husband, and father.Unfortunately for Beecher, this was his third conviction for drunk driving, and the judge wanted to make an example of him, so she gave him the harshest possible punishment.

Beecher begins prison life as a mild mannered and timid target for other inmates. The show's 56 episodes document his personal transformation and experiences along with the effect his imprisonment has on his family. While in prison, he makes friends and enemies, battles his alcohol addiction, and "became the man he always was and never knew."
Posted by Geek Girl Soup at 4:49 PM