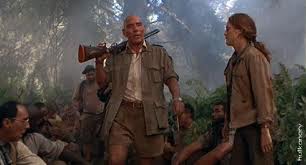 (Chris)
I watched "The Lost World: Jurassic Park" on New Year’s Eve during our Dead Man Watching Film Festival as a tribute to the passing of Pete Postlethwaite. He remains the best thing about this cynical cash-in sequel.

This was the first time I'd ever seen Postlethwaite. Sharp cheekbones that look like they’d cut you in a head butt. Big bass voice like a seasoned theater actor making sure you heard him in the cheap seats. This guy was freaking looking for the T-Rex! How mad is that?

I was sure he was going to end up as lizard chow. That’s how these movies work. They are cautionary tales where the bully gets eaten and the meek inherit the earth, right? Rubbish! Tembo is a predator of the first order. He marched on-screen and stole the spotlight from all the pretty people. Apparently there was a deleted scene where we meet him off the island doing more bad-ass stuff. My guess is Spielberg realized this guy was TOO GOOD and was showing up his wimpy “Heroes”.

This “Big Game Hunter” character was written in the same one-note method as the rest cast. Pete made Roland ooze with a gravity and weight that could not be ignored. With a limited amount of screen time, this skinny bald guy in shorts with knobby knees became the largest guy on-screen. He made a big entrance, kicked ass, and got the hell out of the movie before it had time to really stink up the place.

I wish we had more Roland Tembo movies. He rules!
Posted by Geek Girl Soup at 6:13 PM