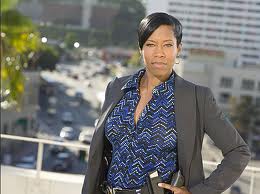 (susan)
One of the best characters on the TNT show SouthLAnd, is Detective Lydia Adams, played by Regina King. The show, which aired first on NBC, follows several police officers and detectives on the streets of Los Angeles. So far two episodes of the fourth season have aired and we see homicide detective Adams with a new partner who seems to be trying to teach her to see more of the gray areas, while she takes a more black and white approach. In a way she is a typical female tv detective. She's tough-as-nails (bad-ass!!), single (makes bad choices), and always does the right thing (seeing in black and white).

There was a scene in the first season of the show **SPOILER ALERT** that firmly established her toughness (and got me hooked on the show). Adams was protecting a teenaged murder witness in her home because there was no money in the budget to put her in witness protection. The bad guys found out where the girl was and came after her. Adams gave the girl a gun and told her to hide in the bathroom while she searched the house for the bad guys with a shotgun. In the end, the bad guys were dead, Adams and the witness were safe, and the viewers were having little heart attacks.

Season 4 episodes air Tuesday nights, and previous seasons are available on demand. If you remember Regina King from 227 or other roles she played as a child, you will have no doubt in your mind that she's all grown up, kicking ass, and taking names these days.
Posted by Geek Girl Soup at 6:25 PM