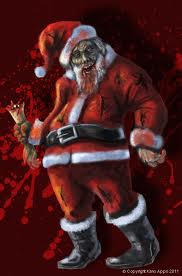 Well, it's that very special time of year when we celebrate family by gathering together, exchanging gifts, and eating a big meal. Some families watch the classics together, for example Miracle on 34th Street, White Christmas, or It's a Wonderful Life. In every family, there is a rebel who decides to turn the channel and try something different. Many of the movies I enjoy are centered around Christmas, but have a foot in another genre as well. Here are some of those non-traditional Christmas movies and shows.

elf (2003) In this film starring Will Ferrell, a "giant" man raised as an elf at the North Pole is sent to New York City in search of his biological father. This is a Christmas comedy, made when Will Ferrell was the funniest man on the planet.

Scrooged (1988) This is the classic story of "A Christmas Carol," but with Bill Murray as the grumpy Ebenezer Scrooge, but updated as a TV executive visited by three spirits on Christmas Eve.

Bad Santa (2003) This is a dark comedy starring Billy Bob Thornton, who plays an alcoholic conman who with his partner poses as Santa (and his Little Helper) to rob department stores on Christmas Eve. They run into problems when the conman befriends a troubled kid, and the security boss (Bernie Mac) discovers the plot. This was also John Ritter's final film


A Christmas Story (1983) A "modern classic": little Ralphie tries to convince his parents to get him a Red Ryder BB gun for Christmas. For many years, this has been shown for 24 hours December 24-25, and I have been known to watch it at least once during that time. One of my friends even has a leg lamp.

If you don't have time for a whole movie, watch the Christmas episode of your favorite show. Many of the Southpark Christmas specials are streaming on Netflix! Community is on hulu!

What will you be watching this holiday season?
Posted by Geek Girl Soup at 8:03 PM