The freak circle is complete 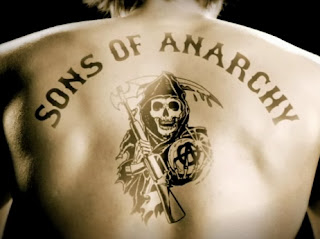 Charlie Hunnam’s back, with his American accent, and so are the rest of the Sons of Anarchy. I was so excited for the return of SAMCRO last week that I watched the first 3 seasons in August so I would be all caught up again for the 4th season premiere on September 7th.  Season 4 starts fourteen months later as the guys are released from prison.  There’s a new sheriff in town who’s not as cooperative as Unser. Hale is the new mayor and the biggest real estate developer in Charming. There’s also a new assistant US attorney who is investigating the Sons and their associates. Jax & Tara got engaged and he’s telling her everything as they agreed in season 1. Not sure if he knows about Maureen's letters yet, I don't think so. Opie & Lyla got married and they’re both keeping big secrets. Juice has some new business partners too. He owns 20% of the new wellness center so he gave Opie & Lyla each 10 colon cleansing sessions. There are new rifts in the club as well as between Gemma & Tara. We're going to learn more about the death of John Teller. The Russians are out this season and the Sons are working with the Mexican gang, The Mayans. Two of the new business partners are Benito Martinez, formerly Captain Aceveda of The Shield, and Danny Trejo. I can’t wait to see what happens! 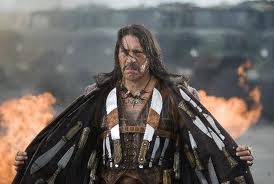 This fangirl is thrilled to see Danny Trejo this season, even if he is only in a few episodes! You’ve seen him before he’s that guy, you know…  He’s played lots of bad guys, gang members, and miscellaneous bad-asses.  I had seen him many times, but first remembered his name after seeing him (and his arm) in ConAir. He’s shorter than I had imagined, but don’t tell him I said that.  ;-)
Posted by Geek Girl Soup at 12:58 PM